…and so it ends 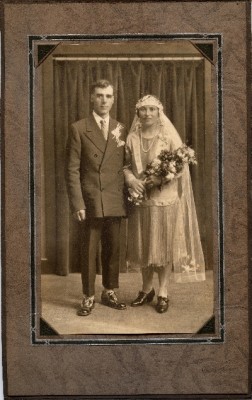 I’ve never written anything in the neighborhood of ten thousand words in a single day before.  And yet that was the incredible feat I managed to accomplish on November 30th.

But it still wasn’t enough.

in the beginning
This year I had decided that I was going to finish NaNoWriMo 2014 with 50k. That’s what the folks at NaNoWriMo call a “win.”

And I very nearly did. But it seems the Flying Spaghetti Monster really had it in for me this time.

I knew going in that I wasn’t ready, a disadvantage from the start.  And I didn’t actually decide what it was that I was going to write until the first of November. In the end, I decided that the best course of action would be to revisit last year’s “Unregrettable” project.

This book was inspired by my grandmother, who emigrated to Canada all alone in 1924.  I never knew my grandmother; but I vaguely knew there was a story that she had been sent overseas to get her away her from an unsuitable young man. The idea for the book first came to mind when I was digitally cleaning up a scan of my grandmother’s passport photo. And of course, I’m a novelist, not a historian or a biographer, so one of my earliest decisions was to have my character settle in the city of Kitchener instead of the rural Carlsruhe area to make it crystal clear this would be a work of fiction.

When I began writing it for last year’s NaNoWriMo, I found myself falling into the rabbit hole of research.  I started out with the idea that I knew something about the time period in which this book is set, but the research I began doing last November quickly disabused me of this notion.   The more I found out about the period, the bigger the project got, and I came to the realization that this story really needed to be more than a single novel. The beginning in the Weimar Republic would need at least a whole novel.   And the research just kept getting more and more interesting.

So the plan this year was to turn Margarethe’s backstory — the events leading up to her emigration — into the first novel.   Kind of like a prequel, or perhaps the first book of a trilogy. Of course I didn’t have an outline to start with, just some of the research I’d done last year, so although I knew some of the scenes I could write without one, I did this while working on the outline.  [One things I have learned is that I can write anything, so long as I have an outline.]  But it was slow going.

I can see clearly now

I’ve been run off my feet a lot this year, so even though I have needed glasses for quite a while, I had been procrastinating about getting new ones.   Another big part of the problem was a reluctance to go back to my former optometrist.  But the incessant squinting at computer screens at the beginning of NaNoWriMo was driving me mad, so when someone told me about a new optometrist he liked, I sacrificed some valuable writing time to get my eyes tested and pick out some new glasses,.  The time away from writing was well worth it since it’s brilliant being able to see what I’m typing again. 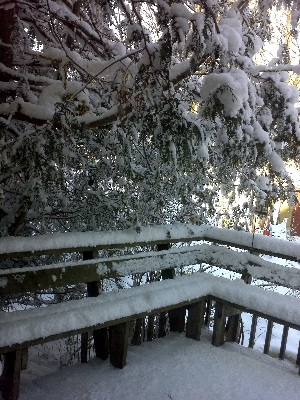 Snow, snow and more snow. In the old days, the era before Climate Change, we might have seen some snow in November. But it would be just a light dusting. A little crunching under your feet, but nothing requiring a shovel. But those days are gone. This year we had snow. We got days where shoveling once a day didn’t cut it. Yay. Of course, *now* it’s all been washed away again, likely to have a green Christmas…

The Leak
One of the big things I’ve had to deal with has been unscheduled renovations. One morning there was water leaking through the plaster ceiling into my front hallway. The first plumber convinced me (because I so wanted to believe him and get back to writing) that the leaking was side splash from the shower curtain not being quite closed. And it stopped– for a while.  *sigh*

But then it started again.  The good plumber said they would have to rip a hole in my ceiling to find the leak. And so they did. And wasn’t that a job! And apparently the leak(s) had been ongoing for a while, since I don’t get along with mold, I enlisted an awesome restoration contractor to handle the clean-up and resultant renovation.  Which meant not just taking down the ceiling, but opening up walls.  I have been happy with the professionalism and skill of my contractors, but it would have been much better for my NaNoWriMo project if it had happened in any other month. 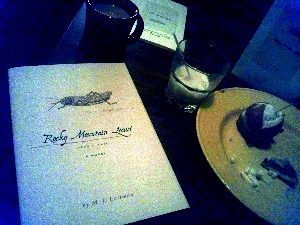 Book Launch
Another writer I know was launching his debut novel, so I took a wee break to attend his “Rocky Mountain Locust” book launch at the Jazz Room in the Huether. As it turns out, my hubby was coming down with a cold, so we didn’t stay long enough for the cake. I am pleased to have the book in hardcover, since it seems to be encumbered in DRM for the ebook format.

Anniversary
I tend to ignore our anniversary and my birthday because both happen during NanoWriMo.   This year we went out for a lovely anniversary dinner — which wasn’t.   The restaurant served me an inedible steak and assured me “they were all like that” so we left.  Peanut butter sandwiches… yay!   (Now that November is over I find I am still angry at the venue so I expect I will send out that letter of complaint I wrote during November.) 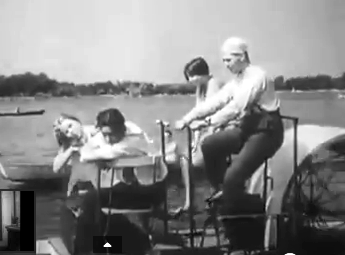 Of course pretty nearly everything I wrote was going to need research, because everything in my novel happens well before I was born, in a country I have never myself visited.

This period in Germany was actually a cultural golden age.  Not only is it a fascinating period of history, but there is a wealth of media available.  Many movies– some in the Public Domain! — from the Weimar Republic make it possible to get a real feel for the time and place.

For me as a movie buff, it is doubly interesting, because so many great movies were made there by movie pioneers like Frits Lang and Alfred Hitchcock.

Is “M” perhaps the first example of Film Noir? 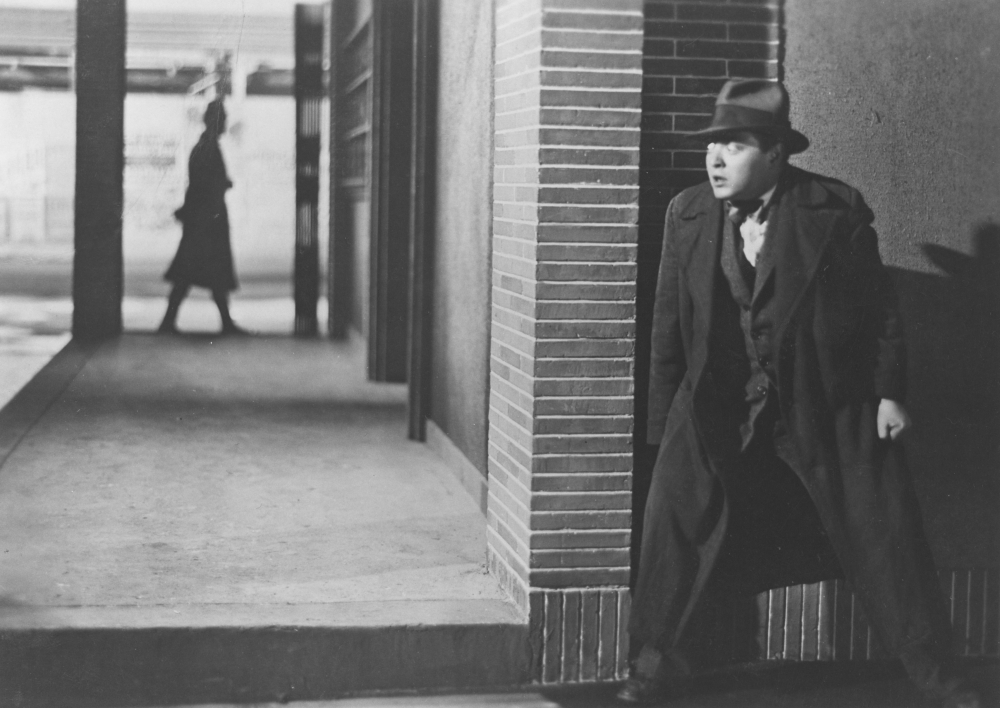 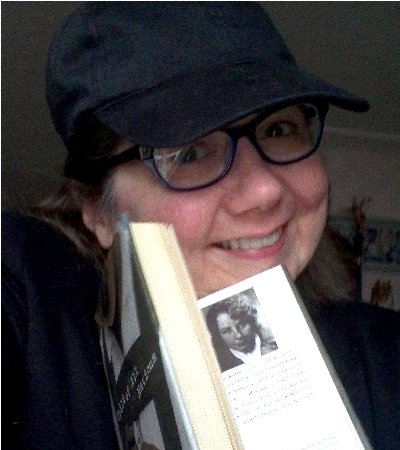 I was very much aware of the dangers involved in researching this book.  Because the reference material available isn’t limited to movies and textbooks, but novels, too.

Certainly the books of Irmgard Kuen are invaluable reference material.  Her own story would make a phenomenal book or movie, but for my purposes, I decided it would be a good idea to read some of her novels since she was the voice of the Weimar Republic’s “Neu Frau” generation.

I tried to buy one of her  eBooks, but it turns out the publisher’s DRM made it impossible to actually open it.   So I ended up ordering some of her books through local libraries.

I knew her novel Gilgi had been made into a movie, and so I looked around enough to try and find it, but alas, there don’t seem to be any copies left in existence.  Not surprising since her books were banned by the Nazis, but it’s too bad, particularly for me, because that’s the book that most closely dramatizes the world my Margarethe inhabits in “Unregrettable”

Teeth
Through my life I’ve had some horrific dental experiences, so I am even worse about visiting the dentist than most people.  Having missed a few regular checkups, naturally I got a toothache during November.

And my dentist tells me that if you go to the dentist when you’re in pain it’s already too late.

As it turned out, the diagnosis was even worse… three– count ’em three — teeth in a row with cavities, and one — or maybe all– would need root canals.  As it turned out, the one I thought was the worst and asked to have fixed first wasn’t the one causing the pain, so I had to go back in the afternoon to get an emergency root canal on the one that was causing the agony.  (If you’ve got a good dentist, always take his or her advice.)   In all my tooth woes probably ate up two days with non-writing… and trust me, it’s easier to write brilliant novels without a toothache. 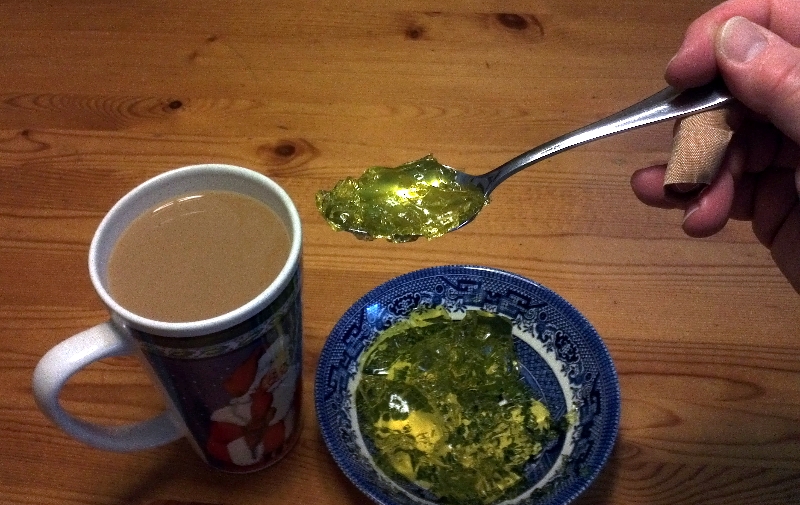 oops
Even with all that, I might have made it. And technically I did make it because I did write more than 50,000 words in November. The problem is that I misplaced somewhere between seven and ten thousand of them. 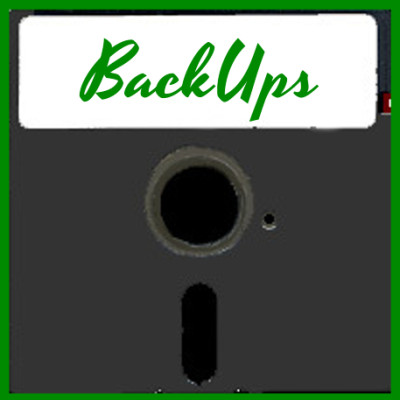 The thing is, I knew about making backups.  Boy, did I know, having once lost the only copy of a script that had been green lighted for production and having to reconstruct the whole thing in a weekend.

Apparently I inadvertently deleted a huge chunk of the manuscript and cleverly saved over it (in all three places.) So now I know saving isn’t enough; versioning software is a great idea.  Next time.

So while I might technically have claimed a win, I didn’t have 50k in my manuscript to validate, and fudging that just would not have felt right. So I didn’t “win” NaNoWriMo this year. But I did get a lot accomplished, and I know that life happens, but I gave it my best shot anyway.

Posted in writing on 24 December 2014 and tagged Alfred Hitchcock, excuses, Frits Lang, Gilgi, Irmgard Keun, NaNoWriMo, Weimar Republic
Comments Off on …and so it ends